These Altcoins May Rally, If Crypto Markets Continue to Rise Throughout the Week!

The FIL price resonated within the symmetrical triangle portion of the pennant pattern for the past three weeks. The sellers triggered a bearish breakdown from this pattern in response to the recent sell-off in the crypto market. The resulting downfall plunged to $6.3 support, which has temporarily halted the current correction. 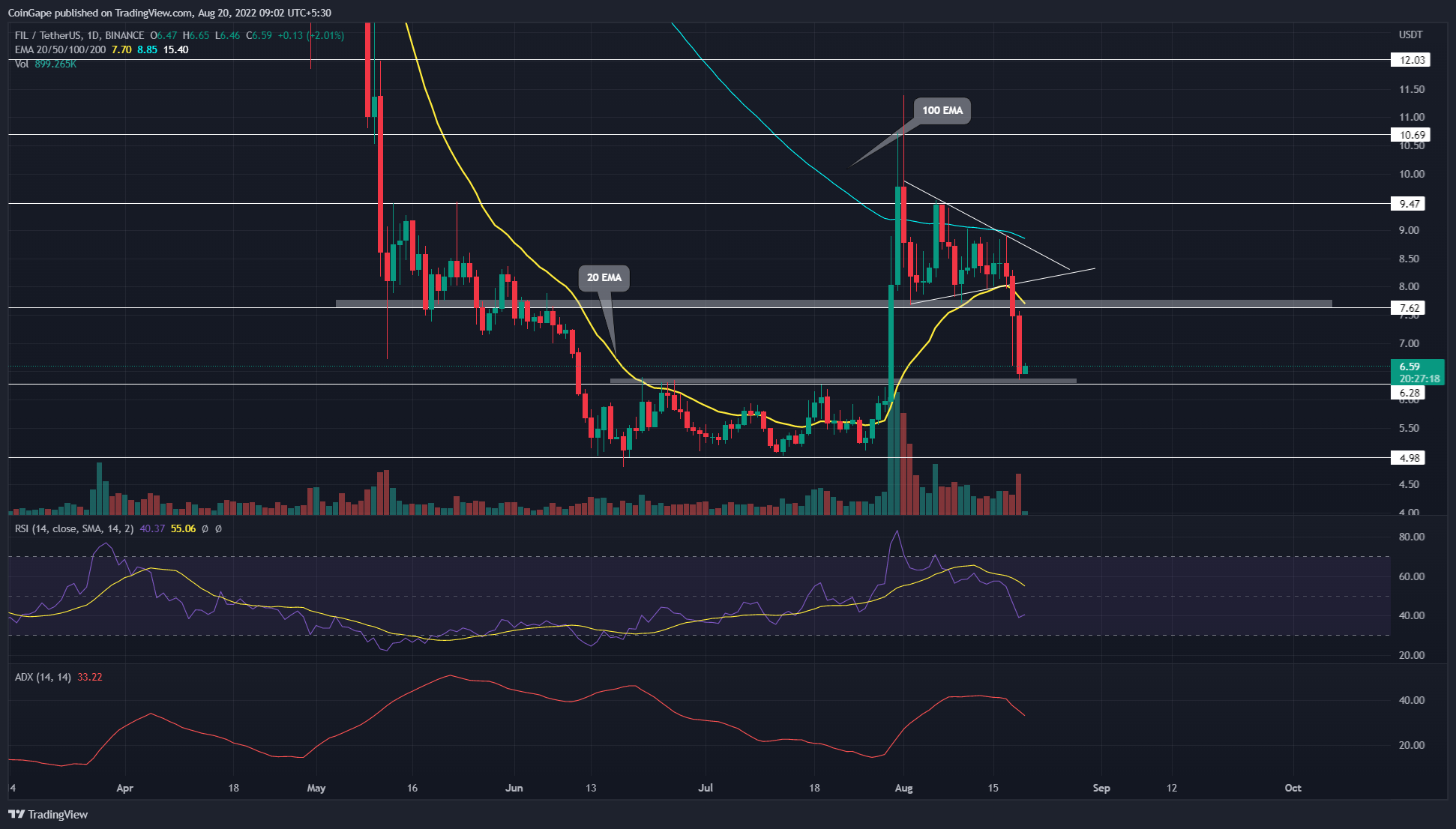 Amid the last month’s recovery, the FIL/USDT technical chart formed a pennant pattern in the daily time frame. This bullish continuation pattern was supposed to accelerate the buying momentum to extend the recovery rally higher.

However, the recent news that the US Fed may increase the interest rate by 0.75% in September has caused quite an impact on the crypto market. As a result, similar to some other major cryptocurrencies, the FIL price witnessed a sudden sell-off.

This selling pressure triggered an unusual activity of bearish breakdown from the pennant pattern. The post-breakdown fall tumbled the FIL price 17.6% down. The altcoin currently trades at $6.64 and has recently breached an in-between resistance of $7.62 support.

The FIL price is likely to revert higher to retest the pierced support. Thus, if the sellers sustain the price below the $6.64 flipped resistance, the altcoin may challenge the $6.28 support.

A candle closing below this level will undermine the July-end recovery and sink the prices back to the $5 bottom support.

EMAs:  with the currency downfall, the coin price dropped below the 20-and-50-day EMA, offering an extra edge for short sellers. These slopes may flip to viable resistance and resume ongoing correction.

Four altcoins flying under the radar are generating big gains as the crypto markets continue to flash signs of strength. One of the best-performing altcoins this week is...

These Altcoins May Rally, If Crypto Markets Continue to Rise Throughout the Week!

Bitcoin price exploded after undergoing immense bearish pressure and acute compression within a narrow range. The breakout beyond $23,500 has induced significant bullish momentum not only within Bitcoin...

Whales Munching on LTC and Two Other Ethereum based Altcoins ...  The Coin Republic Source link

Know Which Altcoins Could Be Ones to Watch For?

As per the on-chain analytics company Santiment, Polygon, Aave and DyDx have all been reassembled with high whale activity recently.  The pertinent sign here is the “whale transaction...

CFTC to Gain Upper Hand in Regulating the Crypto Market