Who Owns The Most Litecoin?

Litecoin (LTC) was one of the early cryptocurrencies, going live in 2011 with a blockchain based on Bitcoin (BTC), but boasting faster transaction processing times.

The coin was previously among the top 10 cryptocurrencies, but as more and more new cryptos have emerged with the arrival of decentralised applications (dApps) running on smart contract blockchain platforms like Ethereum (ETH), LTC has slid down the rankings. As of 26 August, litecoin was the 21st largest cryptocurrency, with a market capitalisation of $4bn.

For Litecoin holders, investors and traders, it’s important to understand who the biggest litecoin holders are, as their buying and selling activity can influence the price. In this article, we take a look at litecoin’s circulating supply and who owns the most litecoin.

Litecoin was launched in October 2011, two years after Bitcoin, by computer scientist Charlie Lee, who was a software engineer at Google at the time. Lee is managing director of the Litecoin Foundation, which aims to develop and advance the adoption of cryptocurrencies. Lee worked at Coinbase (COIN) from July 2013 until June 2017, when he left to focus on Litecoin full time.

Litecoin was designed based on Bitcoin’s proof of work (PoW) protocol, but features several differences in terms of its block transaction times, hashing algorithms, storage efficiency and supply cap.

While Bitcoin has a block processing time of 10 minutes, Litecoin’s block time is 2.5 minutes, as Lee designed the blockchain to be a “lite version of Bitcoin”. It also offers low transaction fees, making it well suited to small transactions.

“With substantial industry support, trade volume and liquidity, Litecoin is a proven medium of commerce complementary to Bitcoin,” according to the Litecoin website.

“Due to more frequent block generation, the network supports more transactions without a need to modify the software in the future.”

On 5 April, the Litecoin Foundation announced the creation of LTCLabs, a digital currency laboratory.

“LTC Labs is managed via a distributed autonomous organisation jointly created by ANTPOOL and Litecoin Foundation. Now the organisation is actively proposing new ideas and paths forward to support and expand the LTC ecosystem.”

On 20 May, the Mimblewimble Extension Blocks (MWEB) upgrade was activated as a soft fork, or software update, in the largest change to the Litecoin blockchain to date.

MWEB was first introduced as a Litecoin Improvement Proposal in November 2019 to “provide users the option of sending ‘confidential’ Litecoin transactions, in which the amount being sent is only known between the sender and receiver, as well as the benefit of having private address balances and increasing Litecoin’s transaction throughput.” Using MWEB sends LTC to the extension block and back to the main blockchain.

However, the upgrade potentially makes Litecoin a target for regulators who do not approve of privacy-enabled cryptocurrencies, particularly in the light of the US Treasury department sanctioning cryptocurrency mixer Tornado Cash.

The major cryptocurrency exchanges in South Korea – Upbit, Bithumb, Coinone, Korbit and Gopax – delisted LTC after the MWEB upgrade because it does not comply with the Act on the Reporting and Use of Specific Financial Transaction Information. 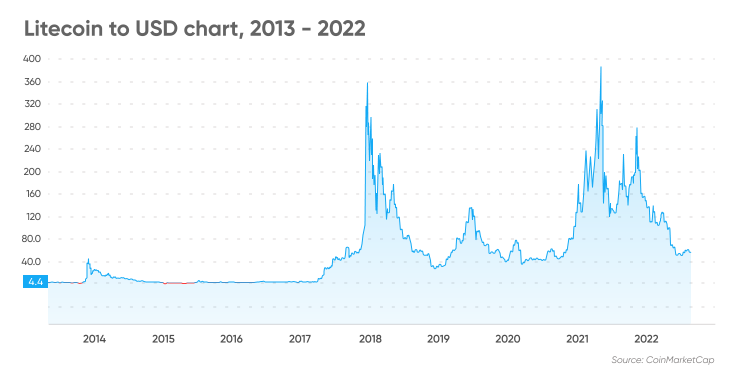 What is your sentiment on LTC/USD?

Give LTC/USD a try

According to Litecoin’s launch notes that Lee published on bitcointalk.org in 2011, only 150 litecoins were pre-mined. Litecoin’s genesis block rewarded miners with 50 LTC per block.

Bitcoin’s block reward for mining new coins, as of 26 August, stands at 6.25 BTC and is set to halve every four years until a total of 21 million bitcoins were mined.

Litecoin miners are rewarded with 12.5 new litecoins per block, which will be halved every four years, or 840,000 blocks, until there is a total of 84 million LTC in circulation. This is four times higher than BTC. Litecoin’s most recent halving event took place in 2019. The next halving is scheduled to take place in August 2023.

As of 26 August, the total circulating supply of LTC was 71 million, accounting for 85% of the maximum 84 million coins, according to CoinMarketCap data. It was expected to take until 2142 to mine the maximum supply, two years after Bitcoin is scheduled to reach its 21 million supply cap.

Who owns the most litecoin?

Who has the most litecoin, and how does that affect the coin’s price?

In December 2017, Lee wrote on a Reddit forum that he “sold/donated all my LTC… that’s not stored in a physical Litecoin”, adding that he held a few physical LTC as collectibles. Lee said he sold the coins in response to criticism, as “in a sense, it is [a] conflict of interest for me to hold LTC and tweet about it because I have so much influence.”

The largest LTC wallet’s holder, who owns the most litecoin, had more than 3.39 million LTC worth over $191.98m, accounting for 2.64% of all coins, according to data compiled by BitInfoCharts, as of 26 August.

The LTC wallet for Binance was the largest exchange wallet and the fifth largest wallet on BitInfoCharts’ Litecoin whales list, holding 745,000 LTC worth $42.12m and accounting for 0.5804% of the coins. Binance is one of the world’s largest cryptocurrency exchanges. Its LTC holdings could be held by retail investors who use its trading platform.

Out of more than two million wallet addresses, the largest concentration of LTC was among the 103 litecoin whales with an LTC balance of between 100,000 and one million coins. They held a combined total of 21.74 million LTC, accounting for 30.6% of the total supply and worth a combined $1.23bn, according to BitInfoCharts.

Around 14.79% of LTC supply was concentrated among seven whale holders, according to data from IntoTheBlock at the time of writing (26 August), holding more than 10.6 million LTC coins worth $601,019,997m.

Why is knowing who owns the most litecoin important for retail investors?

“The fact that a few whales hold as much wealth as many small fry is true of all financial realms,” said research-focussed cryptocurrency firm Clovr.

“It’s a hot topic among cryptocurrency enthusiasts because the lower liquidity and higher volatility in cryptomarkets mean whales can make bigger waves. Concentrated ownership of wealth creates serious points of failure in a system designed to be robust through decentralization.”

Large litecoin holders can have a substantial influence over the price if they sell their holdings, increasing the LTC supply on the market and making the LTC price drop. However, the ownership distribution of a cryptocurrency is only a small part of the picture and should not be the main reason for your decision to trade.

Whether LTC is a suitable asset for you will depend on your trading goals and strategy, risk tolerance, and the size of your account. It is essential that you do your own research before making any trading decision. And never trade money that you cannot afford to lose.

In the wake of the meltdown of crypto exchange FTX, Litecoin (LTC -0.33%) is one of the only top cryptos that is moving higher right now. While Litecoin...

#Litecoin: the Fastest-growing Crypto Payment Method in the World. – Latest Tweet by Litecoin

Many cryptocurrencies have come and gone since the debut of Bitcoin in 2009. Yet, one project, Litecoin, has stood the test of time. Litecoin has become a major...

Here Are Top Three Altcoins To Accumulate for the Next Bull Cycle, According to InvestAnswers

How ‘The Tonight Show’ Entered the Metaverse