Tomi is a Web3 company focused on developing solutions to help make the vision of Web3 a reality.

The core team became interested in the idea of launching a project for Web3 after they saw how the government was affecting the neutrality of the internet by confiscating private property, allowing data silos to operate freely, and forcing developers to share user data.

With team members located in more than 4 countries, the team quickly realized these were not isolated cases but a global reality.

When the internet was originally envisioned back in 1989, it was meant to facilitate the sharing and storage of information by bringing people from all over the world together.

While this objective has been fulfilled in great part, the infrastructure that makes it possible has become highly centralized and stale. Not only do governments and organizations like Google, ICANN, and ISPs hold a great deal of power over it, but they have also been used to prevent free speech.

Monetary and political interests have prevented the internet from evolving as it was supposed, which has prompted many developers and free speech/privacy advocates to push for a new internet.

The result is Web3, a term that has been gaining popularity over the past few years as it promises to be the new stage of the internet evolution.

This is what projects like Tomi are all about: Creating an alternative internet controlled by the community and for the community.

What is Tomi All About?

While most Web3 companies chose to focus on software-based solutions for the development of Web3, the Tomi team found that the hardware aspect was being overlooked.

Tomi was born as a result of the team’s realization that Web3 will require a holistic approach to succeed, requiring both software and hardware solutions to function properly. This led them to prioritize the development of its MP1 server before expanding to other areas. 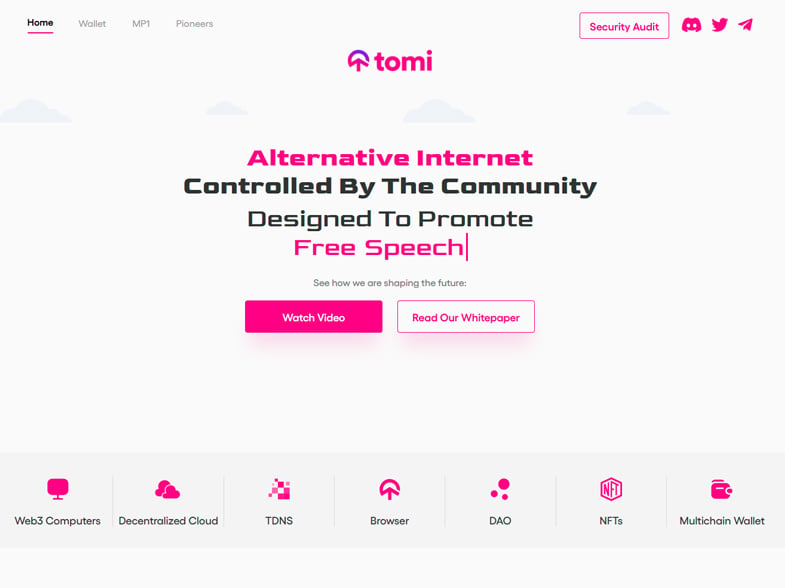 Since its foundation, Tomi has not only successfully built its MP1 server but has also developed a multi-chain digital wallet, opened offices in 3 locations (New York, Tel Aviv, and Islamabad), pre-sold over $2 million worth of “Pioneers club” memberships, and raised more than $20 million.

Now, the company is working on developing other solutions, including the MP2 server, to continue growing and supporting the Web3 movement.

Tomi’s flagship product at this time is the MP1 server. The MP1 is a web3 interconnected machine that can fulfill several functions such as the mining of cryptocurrencies, hosting of decentralized applications, training of AIs, ray tracing processing, and much more.

All of these functions are readily available to the user while also rewarding them for their mining, meaning no dedicated mining rig is required.

With incredible specifications like 1200 TCP of computing power, 500MH/s hash rate, the weight of 22.5kg, and power efficiency of 2W/MH, this server is every blockchain enthusiast’s dream. 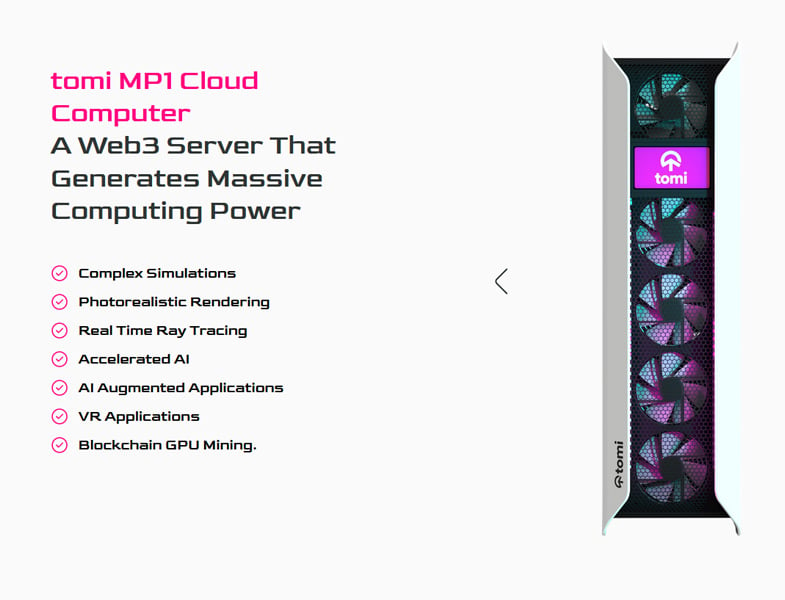 As the MP1 server comes ready to mine out of the box, users of all levels will be able to reap the benefits of cryptocurrency mining without having to overcome the barrier represented by the assembly of mining equipment.

The MP1 server also comes with the additional benefits of being more environmentally friendly than dedicated mining rigs as it not only consumes less energy and is more efficient, but can be easily maintained in domestic environments. This means that fewer resources need to be spent on refrigeration and maintenance.

Anyone who has been part of the blockchain space for more than a month is aware of all the different options available when it comes to digital wallets. While new users had to choose between hard, soft, and paper wallets in the early days of blockchain, this decision is now more complicated than ever. 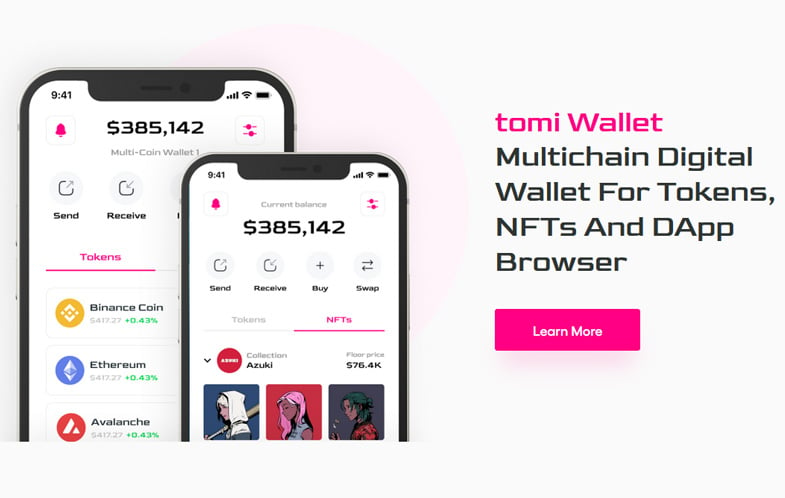 Tomi believes that by offering a powerful(yet user-friendly) multi-chain wallet in addition to its MP1 server, it can truly democratize blockchain technology.

As a multi-chain wallet, Tomi’s digital wallet supports some of the most popular and reliable blockchain networks out there.

This means that Tomi’s wallet can be easily used to store and transact with the world’s biggest cryptocurrencies, connect with top dApps, and access the most decentralized platforms out there.

While popular does not always mean better, being able to access all of these services is essential for any serious trader, investor, or developer in the blockchain space.

By relying on a low number of networks, wallets like Metamask proved that congestion can be an extremely bad issue for blockchain users. When networks like Ethereum get highly congested, not only do transactions fail to complete but fees also skyrocket. This is not a problem with a multichain wallet like Tomi.

Some of the features offered by Tomi’s digital wallet include:

All in all, Tomi’s wallet comes with the features every crypto enthusiast needs while also offering a beautiful and easy-to-use interface, top-notch security, and powerful multi-chain capabilities.

Decentralized Autonomous Organization (DAO) is a governance model that has gained popularity in the blockchain space over the past years.

This model allows users to participate in the decision-making process, making the growth of a project or company a collaborative process with the best interests of the community always in mind.

As Tomi’s mission is that of allowing the masses to compete with traditional centralized entities that have dominated the internet for decades, a DAO will be instituted to allow the community to guide the future of Tomi.

This DAO will be allocated 7% of all profits, 15% of all proceeds from Tomi’s pool, 51.5% of the income from daily auctions, and 50% of profits from the sale of servers and licenses. These resources will be available for the DAO to control and use as chosen by the community.

Users interested in participating in the DAO are required to hold a Tomi Governance token, which will be used to create and vote on proposals. 7 users will be selected to participate in a select committee that will control a multi-signature wallet with the funds necessary for the execution of approved proposals. 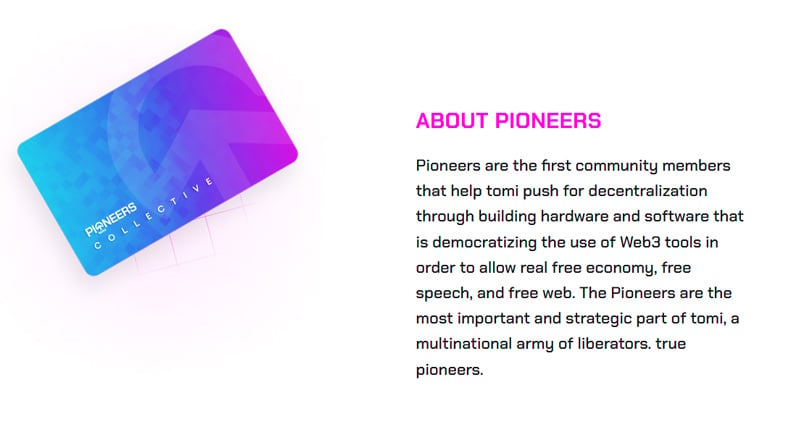 Tomi’s DAO will also be in charge of setting guidelines to prevent Tami’s services from being used for harmful purposes. This ensures that it is up to the community and not third parties to decide which content is permitted and which isn’t, ensuring total neutrality and transparency.

Finally, there is the governance model. Victoria VR operates as a Decentralized Autonomous Organization (DAO), a model that has become increasingly relevant in the blockchain space.

What this means for the users is that they are in front of the projects, helping decide how it grows and evolves. This further adds to the role that users play when it comes to gaining value from their interaction with the Victoria VR universe, taking it to a level that no other Metaverses out of blockchain can achieve.

Tomi is a project that has the best interest of the Web3 community in mind. By offering hardware and software solutions, the company is boosting the growth of the totality of the Web3 ecosystem while also offering its users a unique experience when engaging with it.

What sets Tomi apart is that instead of focusing on developing complex solutions that will be accessible to a few blockchain experts, developers, and investors, it focused on making the space truly accessible.

The complexity of blockchain-based tools has always been the major challenge for mass adoption but with services like its wallet and the MP1, Tomi allows anyone to easily join the space.

With Web3 continuing to gain traction, companies like Tomi are likely to play an increasingly relevant role in helping decentralized technologies like blockchain and Web3 fulfill their purpose.

Community, ease of use, and benefits are all aspects that Tomi is already offering to make a reality.

Back to Bitcoin: A Look Back at 2022  BSC NEWS Source link

How to Create a Pi Network Account – BSC NEWS

The Future of the Metaverse and Extended Reality

The Worst bits of Advice We’ve Heard For Cryptocurrency