Crypto as a Safe Haven. Finally?

by Karel Kašpar
in Market And Analysis
0

5 Things to Consider Before You Make Crypto Investing Decisions

Solana price analysis: SOL falls to $13.98 in a bearish market

Total crypto market capitalisation, according to CoinMarketCap, declined by 2.4% over the week to $928bn. Cryptocurrency Fear & Greed Index fell by 3 points over the week to 24 (“extreme fear”).

Meanwhile, the cryptocurrency market became a safe haven compared to the collapse of major currencies and stock indices. 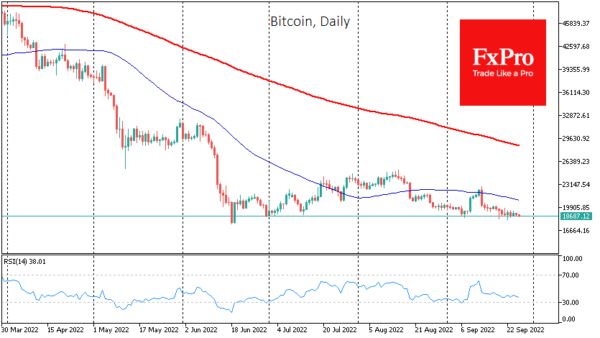 Former MicroStrategy CEO Michael Saylor said that bitcoin would surpass the $69K reached in November 2021 in the next four years. BTC could trade as high as $500K in the next decade if its market capitalisation equals that of gold. Judging by bitcoin’s simple four-year moving average, its bottom is at $20K, Sailor suggested.

Bitcoin’s bear market has yet to reach its final stage, and investors should prepare for further declines. Some participants expressed this opinion in a Cointelegraph poll on Twitter.

Ethereum co-founder Vitalik Buterin said all cryptocurrencies should switch to the Proof-of-Stake (PoS) algorithm. He believes that over the next 18 months, ETH will become much more scalable, which will significantly reduce transaction fees.

Ripple CEO Brad Garlinghouse disagreed with the SEC that Ethereum could be considered unregistered security after the move to PoS.

5 Things to Consider Before You Make Crypto Investing Decisions

When making your decision to invest in crypto, there are a few things you should consider. While price fluctuations are typical in this market, they shouldn’t be the...

Solana price analysis: SOL falls to $13.98 in a bearish market

Solana price analysis shows that the token is trading in bears today. After hitting an all-time high earlier today, the crypto fell spectacularly to reach a low of...

Good morning. Here’s what’s happening:Prices: Bitcoin, ether and other major cryptos traded sideways, albeit slightly to the green.Insights: Asia is ready for a scaled-up, crypto-friendly bank.PricesBitcoin Watches and...

What Does a Risk Analysis Say About Gemini Dollar (GUSD) Tuesday?

InvestorsObserver analysis gives Gemini Dollar an average risk assessment. The proprietary scoring system calculates how much money was required to move the price over the past 24 hours...

Uniswap price analysis reveals that UNI/USD is bearish today. The price has dropped by over 0.21 percent in the last 24 hours and is currently trading at $6.21....

Bitcoin Plunges Below $19,000 Ahead of Fresh U.S. CPI Report