PatentNext Summary: Virtual Reality
(VR)-related patents are expected to rise with the onset of the
Metaverse. Given that VR is fundamentally a software technology,
how do courts review VR-related patents? Early cases show that
courts will apply similar scrutiny as for other software-related
technologies, where VR-related patents will need to satisfy current
patent eligibility standards, e.g., by showing an
“improvement” to underlying computing technology.

The “Metaverse” is an expansive online world that can
be experienced via multiple technological platforms – from a screen
of a mobile device to the lens of a virtual reality (VR) system. VR
systems typically comprise 3D-based software that controls a VR
device, such as a VR headset. A popular example of a VR headset is
the Oculus series of headsets as provided by Reality Labs and its
parent company Meta Platforms.

Given that VR is fundamentally a software technology, how do
courts analyze VR-related patents? As for other software
technologies, it is expected that VR patents will need to satisfy
current patent eligibility standards required under 35 U.S.C.
§ 101 and pursuant to the U.S. Supreme Court’s decision in
Alice Corp. v. CLS Bank International.
See Are Software Inventions Patentable?

One way is to argue that a VR invention provides an
“improvement” to underlying technology compared to the
prior art. See How to Patent Software Inventions: Show an
“Improvement.” The below example case explores how
demonstrating an “improvement” can overcome a patent
eligibility challenge for a VR-related patent.

Early cases show that courts will apply similar scrutiny for
VR-related patents as for other software-related technologies,
where VR-related patents will need to satisfy current patent
eligibility standards, e.g., by showing an “improvement”
to underlying computing technology.

The patent owner, AR Design, had asserted U.S. Pat. No.
7,277,572 (the “‘572 patent”) titled
“Three-Dimensional Interior Design System.” The ‘572
patent describes a “software application configured to reside
on a client computer, which is capable of manipulating 3-D object
representations in-situ with a user-selected or user-generated
interior design scene, and rendering photographic quality
perspective images of the composite scene. ‘572 Patent at
1:8-13.

Defendants (the furniture manufacturers) had each developed
mobile software applications that allowed customers to generate and
render photorealistic 3D objects (e.g., furniture) within a 3D
scene (e.g., a room). A user could rearrange or edit the objects
and scenes in real time.

(a) communicably accessing a server
with a client;

(b) operating with the client, a
client application configured for scene editing and rendering,
including a graphical user interface (GUI);

(c) displaying a 3D scene with the
GUI;

(d) configuring the 3D scene for
being selectively displayed in a plurality of views;

(e) retrieving at least one 3D object
from the server;

(f) importing the 3D object into the
3D scene to generate a composite;

(g) manipulating the 3D object within
the composite for placement and orientation;

(h) rendering a 3D image of the
composite at the client;

(i) selectively reconfiguring the 3D
image in real time;

(j) applying luminosity
characteristics to the 3D image; and

(k) rendering, with the client
application, a photorealistic 3D view of the composite image,
including the luminosity characteristics.

Claim 1 covers an embodiment for furniture manufacturers and
sellers to “showcase their products.” ‘572 Patent at
7:1-2. In particular, the embodiment allows end users to see a
manufacturer’s products in full, realistic, 3D with the ability
to change the texture (textile covering, finish, etc.) of the
product” and “may allow a furniture manufacturer to
exhibit their sofas or chairs covered in all of the different
materials offered by them.” Id. at 7:2-7.

Figure 28 of the ‘572 Patent depicts an example embodiment
as a high-resolution rendering of a 3D “furniture object”
(a bed) positioned in a virtual environment (a bedroom): 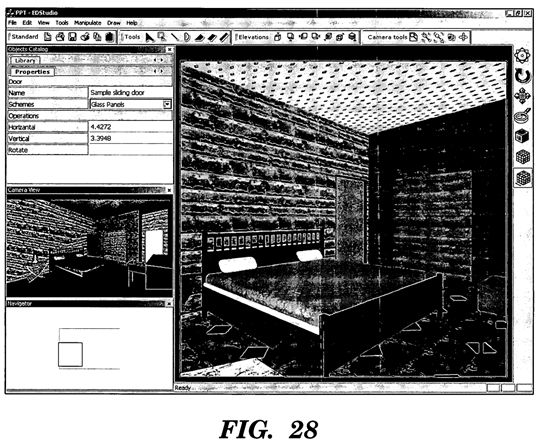 At the outset of the case, the Defendants filed a Section
12(b)(6) motion to dismiss the case.

In particular, the Defendants alleged that claim 1 of the
‘572 patent was not eligible under 35 U.S.C. § 101 because
it was “directed to” an abstract idea – specifically, the
abstract idea of “retrieving, manipulating, and displaying
three-dimensional objects in space,” which was “just a
well-known longstanding practice commonly used by model builders,
students constructing dioramas, architects, and even movie
makers.” AR Design Innovations, 4:20-cv-392, Mem. Op.
and Order (Dkt. 78), slip op. at 3 (E.D. Tex. filed May 12,
2020).

Defendants specifically argued that claim 1 of the ‘572
patent was analogous to the longstanding human practice of making
models or constructing dioramas (i.e., miniature scenes reproduced
in three dimensions by placing figures before a painted
background). Id. at 18.

Patent Owner, AR Design, rebutted that claim 1 was instead
directed to a software tool that set 3D objects in 3D scenes, and
that provided an improvement by allowing for the
application of luminosity characteristics to the scene and the
real-time manipulation of 3D objects on client devices via an
easy-to-use graphical user interface. Id.

The court agreed with AR Design. According to the court, the
‘572 patent claim 1 was “directed to”
specific improvements to the manipulability and
appearance of 3D scenes and objects, including luminosity
characteristics. Id. at 17. The ‘572 specification
explained that the claimed invention enhanced the speed with which
such scenes and objects may be rendered and edited. Thus, because
claim 1 was directed to the underlying system’s
“speed” and “usability,” it could not be
abstract (and, therefore, could not be patent ineligible).
Id.

Accordingly, the court denied the Defendants’ motion to
dismiss. Id. at 19. Each of the defendants subsequently
settled their respective cases.

The content of this article is intended to provide a general
guide to the subject matter. Specialist advice should be sought
about your specific circumstances.

In the distant past of 2019, back when Facebook was just called Facebook and hand sanitizer wasn’t a precious resource, playwright Hannah Khalil wrote a story about a...

the ‘ares house’ stitches the real world with the metaverse Daniel Arsham and Everyrealm celebrated the opening of the Ares House last week in Miami, showcasing a work of...

Free Immersive World That Can Be Embedded In Any Website To Enhance Site Experience, Drive Engagement and Increase Sales Croquet Corporation announced the availability of its free Metaverse Web...

What Does a Risk Analysis Say About Factom (FCT) Sunday?