The altcoins market has delivered mild action in the last few months, given the general downbeat state of the digital assets sector this year. Steep monthly price declines have been witnessed for most coins, including the niche leader Ether, which was at press trading 67.89% down year-to-date. Polygon (MATIC) and Cosmos (ATOM) have registered similar losses during this period compounding 69.15% and 75.24%, respectively. Some notable ones like Cardano (ADA), Polkadot (DOT), and Solana (SOL) have fared comparatively worse, correcting as much as 90% during this period.

The extended losses across the broader crypto market haven’t discriminated against any participants, but none have had to endure the test of resilience as much as Avalanche token holders. The AVAX/USD pair printed consecutive green candles on the first two days of January, setting a YTD high of $116 before logging five negative daily closes to bounce off $82 by the end of the first week. The token price briefly grazed the $100 level again at the start of April, marking the last sight of this three-figure price. In the last three months, the Avalanche token has traded tightly in the $11 – $20 range and recently threatened to dip into the one-figure zone -a scenario that bulls are keen to avoid. 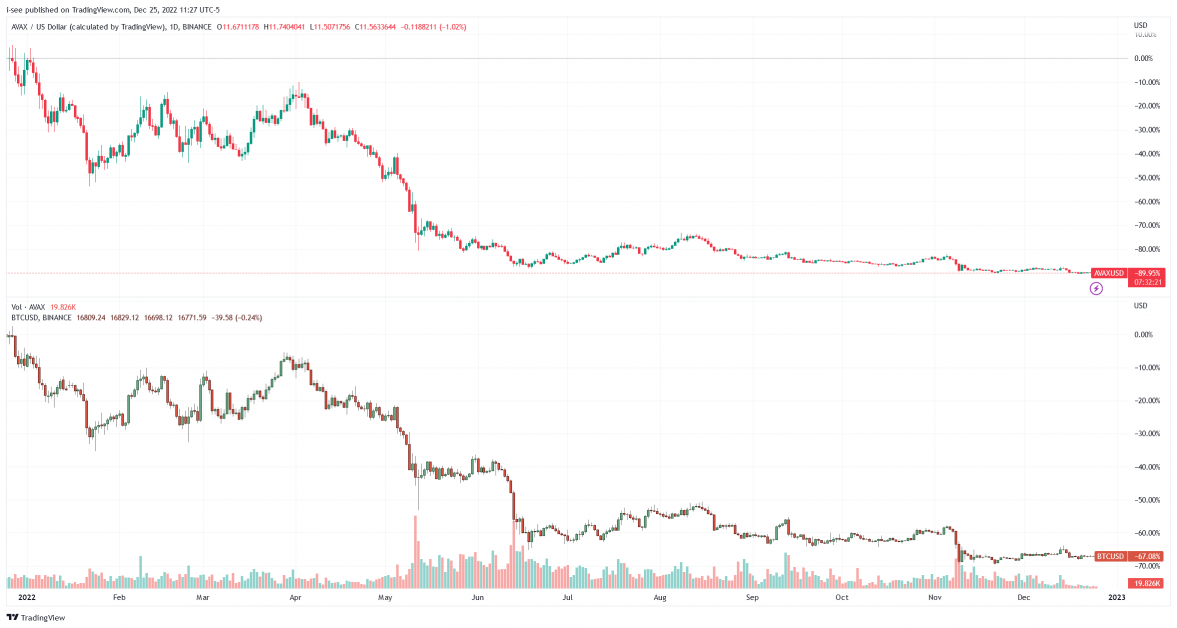 The live price chart snapshot at the time of writing showed that Avalanche (AVAX) was changing hands at $11.40 – marginally above its latest historical lowest price of $11.28 recorded earlier this week. Sideways chopping has been the theme in the current tight range-bound market amid growing selling pressure which sets holders on a path of contending with mild near-term losses towards the end of the year. There are hardly any indicators signaling a recovery at the moment, which compounded with the lack of catalysts at an ecosystem level, offers no respite to holders. Holding onto the $10 support is key after failing to defend the previous $12 crucial mark. The outcome of more downside action that could threaten the former level is unlikely but could be influenced depending on sentiment in the market. 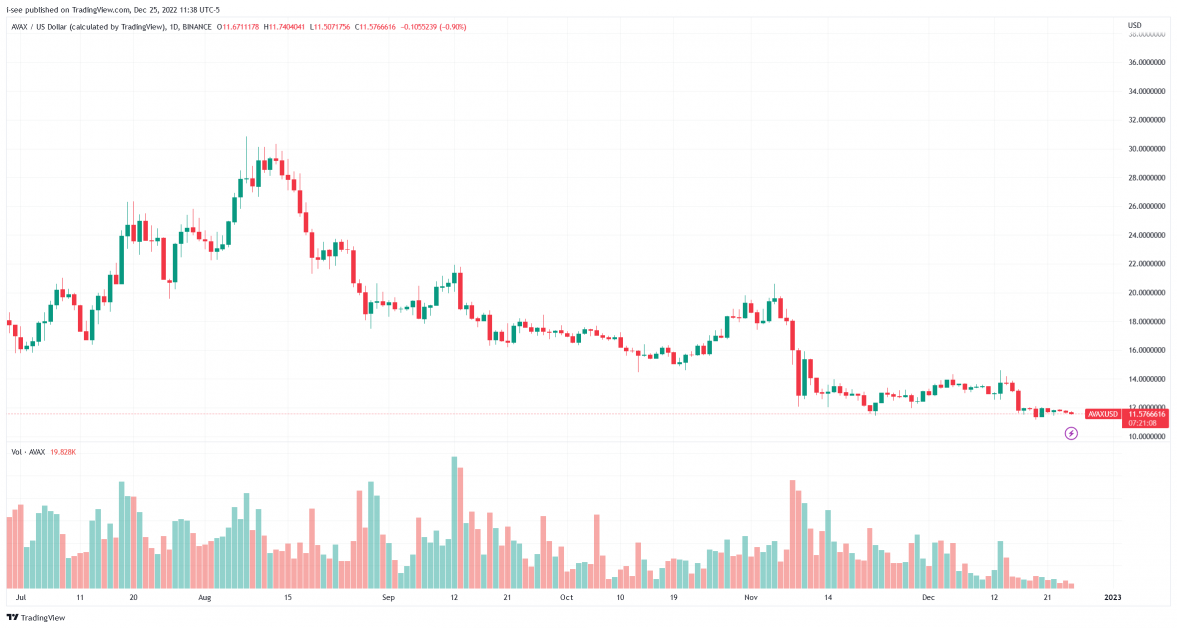 The MACD Level (12, 26) leans towards selling, as do all relevant moving averages featured on TradingView’s technical 1-day analysis. However, the Relative Strength Index (14) and the Money Flow Index (MFI) are balancing at neutral regions. CoinMarketCap data shows that the 24-hr trading volume is up 13.35% on the day.

Avalanche’s DeFi current position tells a similar story as the spot market, with the network’s total value locked (TVL) – factoring staking- down to $1.45 billion from $13.38 billion one year ago. These losses are reflected across all of its major protocols, including Platypus Finance and TraderJoe, whose TVL has been slashed by 3.50% and 14.54% this year.

Network updates and Web3 partnerships fail to inspire a recovery

The bear market has, to some, struck as an opportunity for growth and expansion – a front that Avalanche has been active in despite the failure of its positive announcements to boost AVAX price. 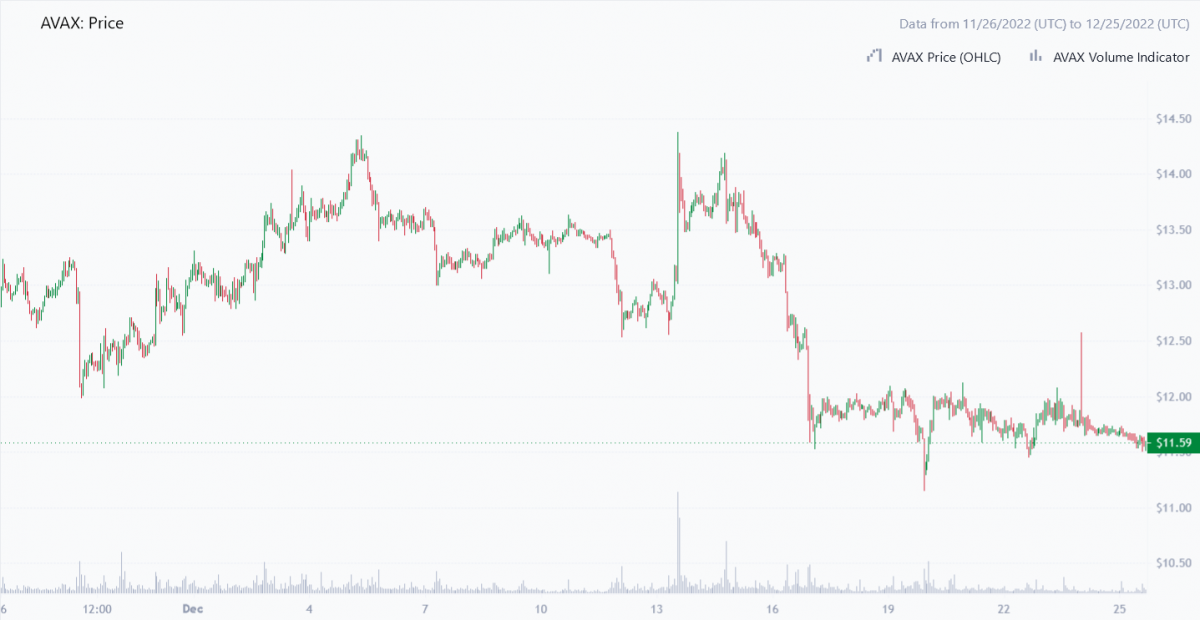 Avalanche earlier this month announced a strategic arrangement with e-commerce giant Alibaba that would see the future-proof chain bring Node-as-a-Service to the popular Chinese commerce platform. Just over a fortnight ago on Dec 10, Avalanche also released an update, Banff4, to its network as part of developments meant to lower node bandwidth usage, guaranteeing a smoother experience.

FIDE to leverage Avalanche for its Web 3 vision

Most recently, the Avalanche team shared news of partnering with the International Chess Federation (FIDE) for the latter’s foray into Web3. In a Friday announcement, the sport’s global governing institution noted that the partnership would help “create operational efficiencies” and “improve game integrity” as it cultivates Web 3 interactions among the chess community exceeding 500 million players. Ava Labs, the builders behind the Avalanche chain, secured featured sponsorship perks at physical chess tournaments as part of the agreement. The network will be able to invest in product development geared towards taking chess into Web 3 as well.

The official implementation of the Avalanche chain in the Go programming language – AvalancheGo recently completed an upgrade to Banff 5. Go v1.9.5 launched as an improvement that facilitates direct, seamless native communication between subnets hosted on the ecosystem. Marking the year’s final release, the new universal, trustless interchain messaging feature is made possible by the Avalanche Warp Messaging communication protocol.

The protocol is built to enable subnets to exchange data and crypto assets, enhancing the utility value provided to developers. Avalanche’s subnets allow users to create custom blockchains to serve their needs while avoiding congestion, unwarranted fee spikes, and network downtimes. The technology has been lauded as promising thanks to its on-demand scaling capabilities, dedicated blockspaces, and customizable user experiences. To some degree, they have improved the developer experience. Projects that wanted to share data or deploy resources across the ecosystem previously had to set up their infrastructure as there lacked a standardized protocol for inter-subnet communication and asset exchange.

AWM allows subnet validators to jointly create a BLS Multi-Signature (verifiable by any other subnet validator) that certifies the validity of a message, such as a transfer, contract data, or any other type of information. Since the subnet validators are responsible for verifying the primary network, they can access the stake weights and registered BLS public keys of any other subnet at any time. This eliminates the need for subnets to constantly send each other updates about changes in their validator sets to continue verifying messages. Patrick O’Grady, the head of Engineering at Ava Labs, has rooted for AWM to catapult subnet technology as it boosts interoperability between blockchains under the ecosystem.

Ava Labs this week also announced the release of Core Mobile, a mobile version of its non-custodial multi-chain wallet, initially on Android and later on iOS. The wallet is designed to facilitate connectivity between decentralized finance (DeFi), NFTs, and gaming ecosystems on the Avalanche, Bitcoin, and Ethereum networks, as well as other EVM-compatible blockchains. Core Wallet, unveiled in June, features native Avalanche bridging functionality and supports direct interaction with decentralized applications (dApps) on the blockchain. Core Mobile’s non-custodial structure lets users retain control of their private keys, providing increased security for asset storage and transactions. The platform aims to give users control over their assets while maintaining a user-friendly interface to meet Web3 accessibility needs.

To learn more about Avalanche, visit our Investing in Avalanche guide.

Shiba Inu: Ethereum whales keep the faith but what does SHIB have to show

Crypto ‘too big and diverse’ for one-size-fits-all regulation: Analyst