If you’re a regular reader, you know that I love the Apple TV+ show “Ted Lasso.” And of the episodes in the second season, one wasn’t even in the original schedule—the Christmas episode was a quick add in the summer of 2021 when the show became a hit. I think that episode is one of the best holiday episodes of television ever written.

Is it sweet and sappy? Of course. That’s probably why I love it. 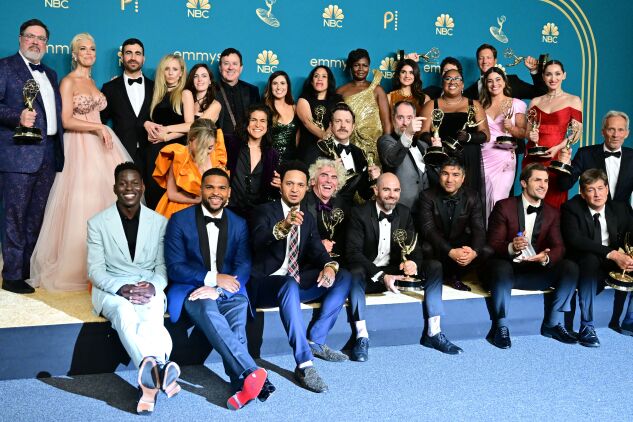 US actor Jason Sudeikis (C), surrounded by the cast and crew of “Ted Lasso”, poses with the Emmy for Outstanding Comedy Series during the 74th Emmy Awards at the Microsoft Theater in Los Angeles, California, on Sept. 12, 2022.

One of the plot lines revolves around Leslie Higgins, the director of football operations for the fictional soccer team AFC Richmond. Higgins is often the voice of reason and responsibility in the show. As a father himself, he takes it upon himself to invite members of the team who are without their families during the holidays to his home. Early on in the show, he notes that they average about two each year.

But that particular Christmas, it would be different. One by one, many of them stop by the Higgins family residence, bearing food and drink and eager to bask in the holiday spirit. That includes Sam Obisanya, the team’s rising star, who, when Higgins asks what Christmas makes him think of back home, says “colonization,” but then quickly adds that he’s happy to share the day with the Higgins family. The rest of the episode shows how they interact with the family and each other—the team has really become, well, a team.

Over the past year, I’ve thought a great deal about what it takes to become a real team. My team looked very different when I started at Bloomberg Tax last year. I’ve been so fortunate—as are you—to welcome Melanie Cohen and Rebecca Baker, who have done a fantastic job helping grow our community. We’ve worked closely with our London team, including Maria Menezes, Kathy Butler, and Stephen Hetherington, to expand our global coverage.

Our columnists, Andrew Leahey and Don Griswold, added so much great commentary this year. You can catch up on their writings here and here, respectively.

And, of course, we’ve benefited from the direction and support of our fearless leader, Rachael Daigle.

This year, we became a real team. Our goal was to grow our community. We did that with great commentary and insightful analysis on federal, state, and international tax issues from our experts. And we had some stand-out pieces.

Jacob Schumer’s piece on Disney’s Reedy Creek special district not only attracted your attention—it garnered interest from other news outlets, including the Washington Post and “Last Week Tonight with John Oliver.” You can read my follow-up to that piece here. (And stay tuned for an update from Schumer, coming out soon!)

The OECD made a lot of headlines this year. One of the most interesting exchanges involved a special commentary piece written by the OECD’s Pascal Saint-Amans, Achim Pross, and John Peterson on how to face the challenges of the Pillar Two global minimum tax. It was a response to an earlier article by PwC’s Will Morris.

Response pieces weren’t limited to the OECD—they were featured in state news, too. In a two-part series found here and here, the Multistate Tax Commission’s Bruce Fort explored a closely watched case on appeal before the Massachusetts Supreme Judicial Court Holdings, VAS Holdings & Investments, LLC v. Comm’r of Revenue, Mass., focusing on some basic principles of state taxing authority. That response was inspired by a two-part series written by Jaye A. Calhoun, Bruce P. Ely, and Kelvin Lawrence, which you can find here and here.

NFTs proved to be a hot topic this year—but not necessarily for good reasons. Fotis Konstantinidis examined the challenges of valuing NFTs and the methods and data used for valuation, while Steven Chung took at look at whether victims of crypto and NFT fraud can take theft loss deductions.

In addition to our author-led insights and analysis, I had the chance to weigh in on some pop culture topics this year, including the World Cup and Taylor Swift. I also got to play Nancy Drew while working on “The Case of the Disappearing Ink—A US Tax Court Mystery.” It was my favorite article to research and write—I even got a space pen out of it. But the piece that I wrote that probably attracted the most attention from tax professionals was about IRS warnings on Employee Retention Credit Claims—even now, ERC mills continue to be a problem.

All in all, it’s been a remarkable year. So it seems fitting that this wrap-up also marks my last newsletter for The Exchange. I’ve loved what we’ve built, and I’ll miss it. Thank you for allowing me into your homes and offices each week—it has meant a lot to me.

At the end of that “Ted Lasso” episode, Higgins looks around the room and proposes a toast. His words work here, too. So, for all of you, “To the family we’re born with, and to the family we make along the way.” Have a wonderful new year!

US taxpayers who live abroad—like Ted Lasso—are taxed on worldwide income. However, taxpayers may opt to take advantage of the foreign earned income exclusion. It’s adjusted each year for inflation. How much is it for 2022?
Answer at the bottom.

A recent bill passed by Colorado voters allows for the establishment of a regulated market for plant-derived psychoactive substances. Potential owners of natural medicine companies should understand how Section 280E of the tax code may affect their businesses, says Holland & Hart’s Jennifer Benda.

On the heels of the recent volatility and dramatic expansion of digital asset markets, the IRS—particularly its criminal investigative division—is likely to dedicate more resources to compliance and enforcement efforts, say alliantgroup’s Eric Hylton and Don Sniezek.

In a two-part article, Eugen Trombitas of PwC reviews the significant indirect tax developments in New Zealand during 2022 and takes a look at future global indirect tax policy trends.

State and local authorities recently have used decisions and enforcement to go beyond the language in tax statutes. In this edition of “A Closer Look,” Eversheds Sutherland’s Jeff Friedman and Liz Cha look at examples of these attempts to expand the tax base and the challenges faced by those who litigate such cases.

If Donald Trump’s tax records provide evidence of a crime, he should be held accountable. Yet society abhors the concept of double jeopardy, and so with every stone cast his way in the public square, there is one less to be thrown in court, columnist Andrew Leahey says.

Christmas came early this year for many taxpayers and tax professionals. Just before the holiday, the IRS announced that it would delay the revised controversial reporting requirement for third-party settlement organizations. That means that many who were worried about the potential onslaught of Forms 1099-K are getting a reprieve. Here’s what you need to know.

At The Exchange, we welcome responses from our readers and encourage diversity and civil discussion. We are especially interested in responses that add to the conversation, or introduce a different point of view. If you have a response to one of our published Insights, we’d love to hear from you.

It’s been another busy week in tax news from state capitals to Washington. Here are some stories you might have missed from our Bloomberg Tax news team.
*Note: Your Bloomberg Tax login will be required to access Tax News.

Sabina Bramlett has joined Jackson Walker LLP as a partner in the trusts and estates practice in Dallas, the firm said.

Kristina E. Kelly has been promoted to partner in the private clients practice group at Diserio Martin O’Connor & Castiglioni LLP, according to the firm.

If you are changing jobs or being promoted, let us know. You can email your submission to TaxMoves@bloombergindustry.com for consideration.

Our Spotlight series highlights the careers and lives of tax professionals around the world. This week’s Spotlight is on Brian Ginsberg, a partner in the appellate practice group at Harris Beach PLLC in New York.

Sign up for your free copy of our newsletter delivered to your inbox each week. Just head over to The Exchange and sign up using the green “Free Newsletter Signup” box at the top—or just go directly to the newsletter sign-up page.

What Did You Think?

Your feedback and suggestions are important to us, so don’t hesitate to email us directly at taxinsights@bloombergindustry.com.

Staking has become a major part of the cryptocurrency ecosystem. It has become one of the best ways for investors to make money while still holding on to...

Are you going long on Tezos [XTZ] in August? Read this first