Ethereum Price Escapes Market Uncertainty; Here’s What To Expect Next

These Altcoins Could Be Ones To Watch, Santiment Suggests

Top 3 Altcoins to Splash Out in February 2023-Do You Have Some in your Portfolio? – Coinpedia Fintech News

While the overall market was struggling with uncertainty, the Ethereum price also remained trapped between two horizontal levels of $1160 and $1230. This consolation phase lasted for around two weeks and limited the ETH growth to a narrow range. However, the crypto market has turned positive since the beginning of 2023 and has created a sense of recovery among the majority of cryptocurrencies. As a result, the Ethereum price rose for four consecutive days and is 5.8% up since last week. 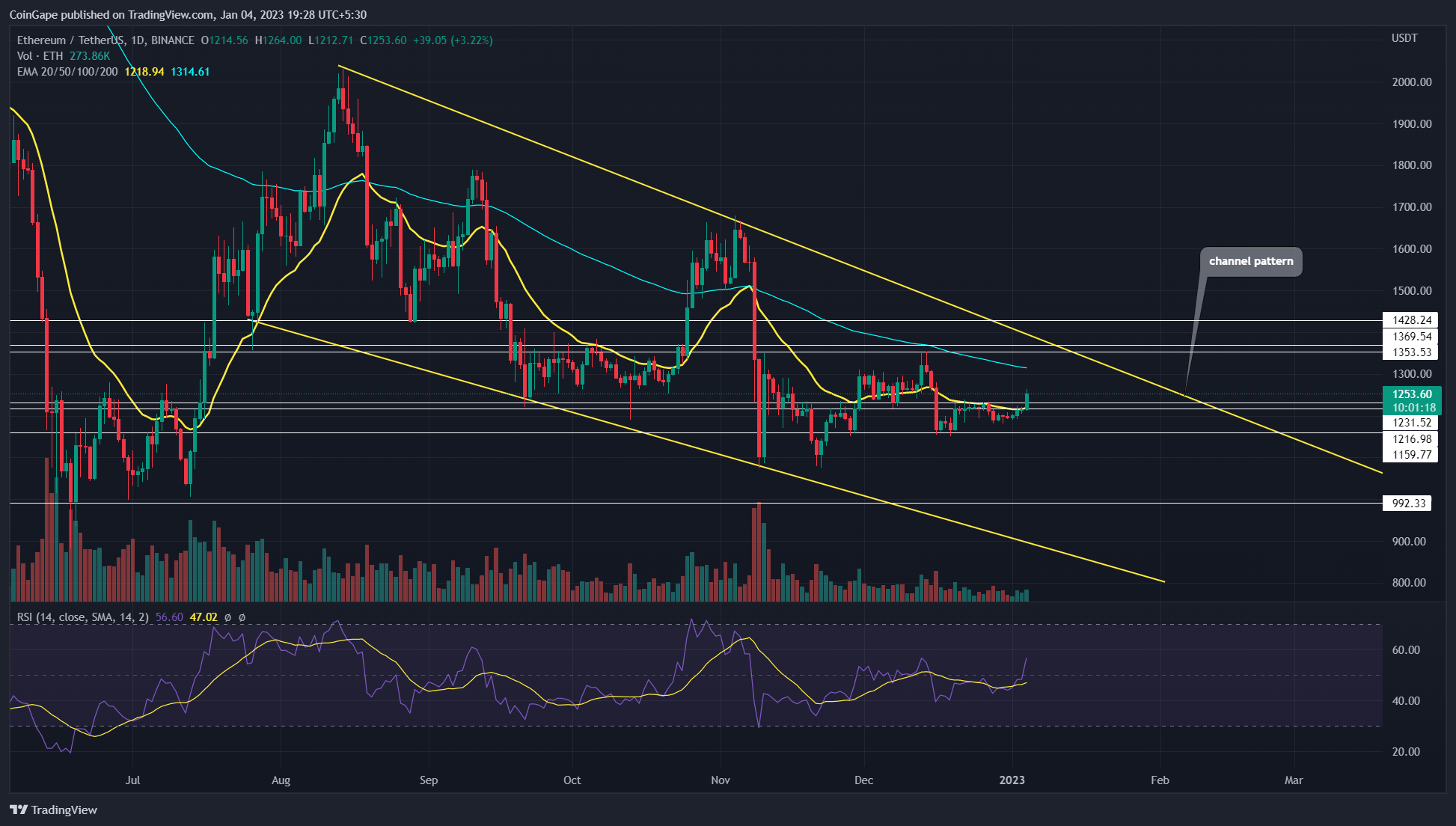 With today’s massive bullish candle, the ETH price broke the $1230 resistance to replenish the trapped bullish momentum. The volume activity rose during the breakout, which also bolsters the buyer’s commitment to the price rally.

Thus, if this altcoin manages to sustain above the $1230 flipped support, the price may rise more than 8.2% to hit the resistance trendline of the falling channel pattern. This pattern displays itself as carrying a downtrend between two parallel walking trendlines.

However, even though this pattern showcases a steady downtrend, In theory, it eventually provides a massive price rally upon the breakout of its resistance trendline. Thus, the ETH price bullish breakout from the resistance trendline will signal the start of a fresh recovery rally.

On a contrary note, a bearish reversal from the overhead trendline will prolong the prevailing downtrend in Ethereum.

EMAs: along with $1230, the prices breached the 20-day EMA, offering buyers an extra footing to rise higher.

These Altcoins Could Be Ones To Watch, Santiment Suggests

Data from Santiment shows these altcoins have seen elevated whale activity recently, which may make them ones to watch for in the coming days. Polygon (MATIC), Aave (AAVE),...

A widely followed cryptocurrency trader is urging traders to be cautious about an altcoin that has skyrocketed to a new all-time high this year. Despite Aptos’ (APT) “absolutely...

Top 3 Altcoins to Splash Out in February 2023-Do You Have Some in your Portfolio? – Coinpedia Fintech News

Top 3 Altcoins to Splash Out in February 2023-Do You Have Some in your Portfolio?  Coinpedia Fintech News Source link

Adobe Stock / LALAKAThe weakening of the US dollar continues to be a concern for many, with the US Dollar Index sliding to a seven-month low after reaching...

Top Crypto Trader Says One Ethereum Rival Could Erupt by 100%, Updates Outlook on Bitcoin and Altcoins

Custody and Settlement to Separate from Centralized Crypto Exchanges

Cardano finds some support at $0.36, but the downtrend remains unbeaten