Litecoin (LTC), Moderate Volatility and Falling Friday: Is it Time to … – InvestorsObserver

Shiba Inu has seen 4% gains in the past 24 hours as the meme coin becomes the most traded token among the top 100 Ethereum whales.

As per data from the crypto whale tracker service WhaleStats, Shiba Inu has been the number one traded coin among the 100 biggest Ethereum whales today.

The meme coin is also currently the favorite token of the top 500 ETH whales by a distance, as they are currently holding a massive stack of SHIB worth $579 million.

These whales holding such a large amount of Shiba Inu shows that they have bullish conviction about the asset at the moment. Though, their holdings are still not on the same levels as a year ago, as at one point, they used to hold more than $1 billion worth of SHIB in their wallets.

One positive effect of the crypto’s recent strength has been on its standing in the wider sector, as its position on the top crypto by market cap list has improved to 13th now, overtaking Litecoin.

2023 has been a great year for the dog-themed meme coin so far, as the year-to-date returns of the crypto stand at more than 41% right now. And despite a pullback recently, it would appear that this rally may potentially not be over just yet as the coin has continued to see gains.

At the time of writing, Shiba Inu is trading around $0.00001147, up 4% in the past day. The below chart displays how the asset has performed over the last month. 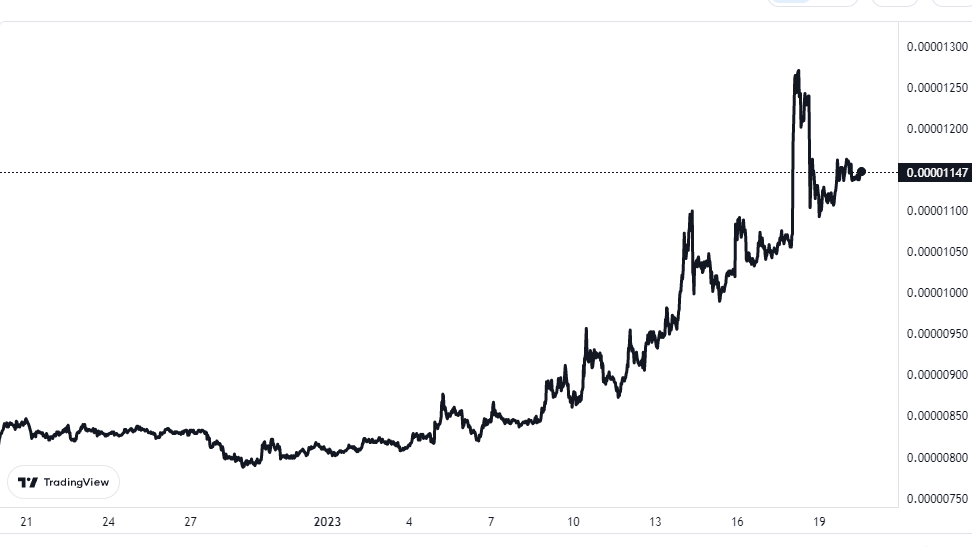 As shown in the above graph, Shiba Inu has been observing sharp upwards momentum this year so far. A couple of days ago, however, after peaking just under the $0.00001300 level, SHIB faced some resistance and retraced back a bit.

But instead of continuing on the downtrend, the coin seems to have picked itself back up well, as the asset has once again been climbing upwards since the pullback ended. Because of this strength, holders of the asset are still in profits of more than 20% over the past week. For comparison, Shiba Inu’s biggest rival, Dogecoin, hasn’t been able to perform nearly as well recently, as it is up only 2% over the past week.

In terms of returns over the last month, the meme coin has accumulated gains of almost 40%. DOGE is also very behind SHIB in this period, since the original meme coin has managed just 13% profits in the past 30 days.

But why has Shiba Inu performed so well recently? There is a multitude of reasons behind it, like developments related to the upcoming Shibarium upgrade. One of the possible factors could also be whale activity.

Litecoin (LTC), Moderate Volatility and Falling Friday: Is it Time to … – InvestorsObserver

Why Bitcoin, Litecoin, and Dogecoin Are Moving Higher Today – The Motley Fool

How Much Taxes Do You Have To Pay On Crypto – FingerLakes1.com

How Much Taxes Do You Have To Pay On Crypto  FingerLakes1.com Source link

What Does a Risk Analysis Say About PoSW Coin (POSW) Sunday?